Whangaroa, Kaeo, Museum,
​Have you ever taken time to pop into your local museum and see what can be discovered there?
It is surprising how many ‘locals’ have not yet visited us but those who do, along with the many local tourists and overseas visitors, are always pleasantly surprised with what they see.
It is so rewarding when a visitor mentions that they may have had a relative who lived in the Whangaroa area ages ago, and then from our extensive files they find they are able to trace their family history or discover new and valued information.
Displays are changed monthly - recent displays have been: March: The Hare Family, April: ANZAC, May: The Post Office and Exchange and for June: Transport through the Ages.
Open on a daily basis from 10.30 to 2.30. We are run by a dedicated band of Volunteers. Admission is free although we do love and appreciate any donations received that enable us to continue to provide the services that we do. 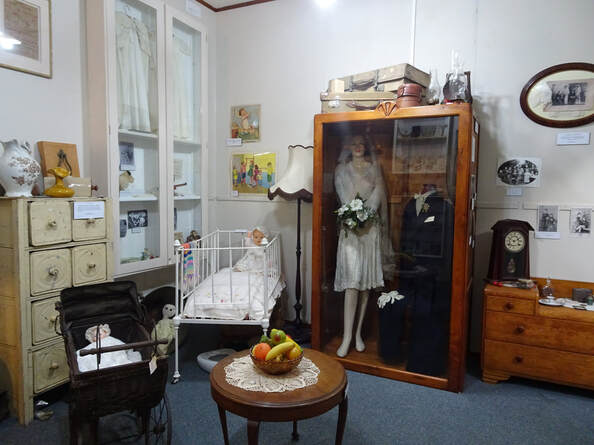 The Colonial Room today, just one of many rooms within the museum.
Call in to view the main gallery- given a facelift in 2017 when Heritage Rescue visited.
We also have a hall of family portraits and local scenes, the Rememberance Room honouring our Men who fought in the wars, the School Room and 'O Te Raki' which holds the taonga of our area.
. 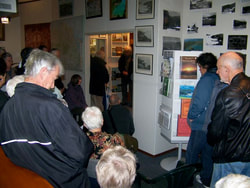 http://www.stuff.co.nz/auckland/local-news/northland/northern-news/5146631/Crowd-turns-out-at-Kaeo-as-Whangaroa-Museum-opens
"It was the sort of weather Kaeo is becoming famous for. But the soggy start to Queen's Birthday weekend didn't stop a big crowd and dignitaries turning out for the opening of the Whangaroa Museum and Archive Society's new home. An estimated 100 people packed into the former Far North District Council service centre which the society bought last year to house its historic artefacts.

Retiring Northland MP ... John Carter ... praised the society for its achievement. "It is great to see communities like this do something for themselves." He also congratulated members on the historical displays which he found fascinating. "What I've seen is outstanding."

Far North mayor Wayne Brown said he loved to see the district's villages reinvent themselves so well. "Part of that is to restore the past."

Museum president Michael Hayes said it had taken 24 years for the society to acquire a building with private donations and funds from the sale of Vernon Sale's book Whangaroa." 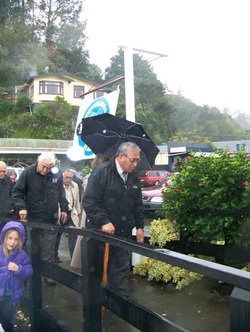 NORTHERN NEWS, 30 April 2014, p8 - two great articles by Lorelei Hayes
"Clay helped mould the region's rich history", with an early Kaeo photograph and inviting readers to call in to the museum to look at Lorelei's display from Tepene Tablelands
"Fallen in the Flanders Mud", with a photograph of Kaeo soldiers, also linking to a display in the museum
http://northernnews.realviewdigital.com/?startpage=8&iid=91262


NORTHERN ADVOCATE, 17 May 2014 - Book retells stories from Kaeo history - Colourful tales from what was the hub of a Far North town for more than a century are in a new book.In Praise of Our Post Office, by Whangaroa writer Fiona Craig, tells the story of the 102-year-old building's past life as a post office and telephone exchange. It is now the Far North District Council's Kaeo customer service centre and library.
Craig told a packed Kaeo Library at the book's launch earlier this month her interviews with former post office and exchange employees made entertaining reading.

Subscribers were so awed when the telegraph first came to Whangaroa they sang songs to one another down the line. A former worker recalled wind gusts in a storm once sucked away a lineman's false teeth as he barked orders to workmates restoring power. Postal staff remembered handling unusual items including a box of bees and a wooden leg.
Craig also discovered Whangaroa once had 14 post offices dotted around the hills, often the only means of communication for isolated folk.
Twenty locals and the Whangaroa Museum and Archives Society contributed stories or helped with research.
Craig singled out council governance officer Sheryl Bainbridge for commissioning and helping secure finance for the book.

The Bay of Islands-Whangaroa Community Board was one of several organisations that provided grants. A World War I Commemorations fund, administered by the Lottery Environment and Heritage Committee chaired by councillor Sally Macauley, also gave funding for the book.
(Peter de Graaf)